The rules of chess (also known as the laws of chess) are rules governing the play of the game of chess. While the exact origins of chess are unclear, modern rules first took form during the Middle Ages. The rules continued to be slightly modified until the early 19th century, when they reached essentially their current form. The rules also varied somewhat from place to place. Today Fédération Internationale des Échecs (FIDE), also known as the World Chess Organization, sets the standard rules, with slight modifications made by some national organizations for their own purposes. There are variations of the rules for fast chess, correspondence chess, online chess, and chess variants.

Chess is a game played by two people on a chessboard, with sixteen pieces (of six types) for each player. Each type of piece moves in a distinct way. The goal of the game is to checkmate, i.e. to threaten the opponent's king with inevitable capture. Games do not necessarily end with checkmate – players often resign
if they believe they will lose. In addition, there are several ways that a game can end in a draw.

Besides the basic movement of the pieces, rules also govern the equipment used, the time control, the conduct and ethics of players, accommodations for
physically challenged players, the recording of moves using chess notation, as well as provide procedures for resolving irregularities which can occur during a game. 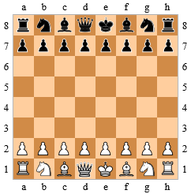 Chess is played on a chessboard, a square board divided into 64  squares (eight-by-eight) of alternating color, which is similar to that used in draughts (checkers) (FIDE 2008). No matter what the actual colors of the board, the lighter-colored squares are called "light" or "white", and the darker-colored squares are called "dark" or "black". Sixteen "white" and sixteen "black" pieces are placed on the board at the beginning of the game. The board is placed so that a white square is in each player's near-right corner. Each player controls sixteen pieces.

At the beginning of the game, the pieces are arranged as shown in the diagram. The second row from the player contains the eight pawns; the row nearest the player contains the remaining pieces. Popular phrases used to remember the setup, often heard in beginners' clubs, are "queen on her own color" and "white
on right". The latter refers to setting up the board so that the square closest to each player's right is white.

Play of the game

The player controlling the white army is named "White"; the player  controlling the black pieces is named "Black". White moves first, then players alternate moves. Making a move is required; it is not legal to skip a move, even when having to move is detrimental. Play continues until a king is checkmated, a player resigns, or a draw is declared, as explained below. In addition, if the game is being played under a time control players who exceed their time limit lose the game.

The official chess rules do not include a procedure for determining who plays White. Instead, this decision is left open to tournament-specific rules (e.g. a
Swiss system tournament or Round-robin tournament) or, in the case of non-competitive play, mutual agreement, in which case some kind of random choice is often employed.

If a pawn advances to its eighth rank, it is then promoted (converted) to a queen, rook, bishop, or knight of the same color, the choice being at the discretion of its player (a queen is usually chosen). The choice is not limited to previously captured pieces. Hence it is theoretically possible for a player to have up to nine queens or up to ten rooks, bishops, or knights if all of their pawns are promoted. If the desired piece is not available, the player should call the arbiter to provide the piece.

A king is in check when it is under  attack by one or more enemy pieces. A piece unable to move because it would place its own king in check (it is pinned against its own king) may still deliver check to the opposing player. A player may not make any move which places or leaves his king in check. The possible ways to get out of check are:

If it is not possible to get out of check, the king is checkmated and the game is over ). In informal games, it is customary to announce "check" when making a move that puts the opponent's king in check. However, in formal competitions check is rarely announced.

If a player's king is placed in check and there is no legal move that player can make to escape check, then the king is said to be checkmated, the game ends, and that player loses. Unlike other pieces, the king is never actually captured or removed from the board because checkmate ends the game.

The diagram shows a typical checkmate position. The white king is threatened by the black queen; every square to which the king could move is also threatened; it cannot capture the queen, because it would then be threatened by the rook.
more rules of chess from wikipedia