The 2021 North American Youth Chess Championships was held August 16-21, 2021 at the Hilton Chicago, 700 S. Michigan Ave, Chicago, Illinois. It’s one of the highest-level youth chess tournaments in North America. More than 400 chess players from four countries participated in the great event. Medals as well as direct FIDE titles and norms are awarded to the top three players in each section. A total of 16 players from KLC participated this year. Chelsea, Patrick, Iris, and Lerui have been invited into the US Team, they are all ranked in the top ten in the USA by age category. After 6 days and 9 rounds of tight competition, KLC students won one Champion and awarded 3 Candidate Master titles. Chelsea Zhou won U16 Girl section bronze medal and awarded WCM title, Iris Li won U10 Girl section bronze medal and awarded WCM title, Luke Hong won U8 Open section gold medal and awarded CM title.

In the U8 Open section, there were 5 players from KLC, Luke won champion, Lerui ranked fifth and Young ranked sixth, and they took 3 of the top 6 places. In the U10 Open section, there are 4 players from KLC, two players won the top ten place. Patrick Liu ranked fourth place and Andy ranked tenth place.
​
North American Youth Chess Championships is one of the highest-level youth chess tournaments in North America. Hundreds of high-level chess players from four countries including the United States, Canada, Mexico, and the Bahamas compete each year. Each event is set up in a different country and is rotated every year. 2019 was in Kingston, Canada and 2018 was in Puerto Nuev, Mexico. KLC chess player Bryan Xie won the 2018 U10 Open section champion and awarded the CM title.

The age categories for the 2021 North American Youth are Under 8, Under 10, Under 12, Under 14, Under 16, and Under 18. Each category has an Open and Girls section. A player’s age for this tournament is his/her age as of January 1, 2021. Each section is a 9-round Swiss tournament with a time control of 90 minutes plus 30-second increment per move.

Congratulations to all the KLC players who participated in the championships. And encourage the players who have not won trophies. Your efforts will definitely bring more game experience and motivation to yourself.

We are pleased to announce KLC Elite Group Student Lerui Zheng will be officially invited to participate in the 2022 World Cadet Chess Championships! Lerui just turned 7 years old, rating 1682, ranked top 5 in US Boys top 7 and under. He earned this honor by meeting the peak post-tournament (PPT) rating and activity criteria in her age and gender categories according to the Scholastic National Invitational Event and Award Requirements and subsequent Executive Board motion to adjust the rating and activity requirement periods.

In a tournament that was held in Ohio, Lerui’s rating reached 1673, which successfully meets the boys age under 8 and rating 1600 eligibility requirements. Lerui played in the U1900 section and scored 3/4. His next goal is rating 1900, which is the requirement of US Team U10.

Congratulations to KLC Elite Group Student 8 year old Iris Li, qualified to 2022 US Team U10. Ranked #2 in US Girls Age 8.

We are pleased to announce KLC Elite Group Student Iris Li will be officially invited to participate in the 2022 World Cadet Chess Championships! Iris is 8 year old, rating 1638, ranked #2 in US Girls Age 8. She earned this honor by meeting the peak post-tournament (PPT) rating and activity criteria in her age and gender categories according to the Scholastic National Invitational Event and Award Requirements and subsequent Executive Board motion to adjust the rating and activity requirement periods.

In the 49th World Open Chess Tournament that held in Philadelphia July 2-5, Iris’s rating reached to 1638, which successfully meets the girls age under 10 and rating 1500 eligibility requirements. Iris played in U2000 section, she defeated players rating 1829, 1800, 1966, 1810 and even 500 points higher than her. Congratulations to Iris. Her next goal is rating 1700, which is the requirement of US Team U12.

Congratulations to KLC students won individual Champions and U9 Open Team Champion and U800 Team 2nd Place in 2021 Las Vegas International Chess Festival.
The annual Las Vegas International Chess Festival was successfully held 6/17 to 6/20. This is Las Vegas first major offline tournament since the epidemic, and attracted many players to participate, events include National Open, US Women’s Open, International Youth Championship, Youth Trophy Tournament and many other side events, like Blitz, Grandmaster camp, Grandmaster Simuls, Puzzle Solving Competition, etc. It’s one of the most popular national chess events and tournaments every year.
This year, KLC chess players also joined the events and played very well. Most of the children participated in the national tournament for the first time. Their hard work during the epidemic has now won trophies and rewards. Congratulations to our young chess players and future starts.
6 year old Claire stood out from hundreds of young players. In the final round, she played with a 10 year old boy and got a draw after 51 moves, stayed undefeated in five rounds and ranked fifth place. Jimmy won U1000 champion, Ruyi won 9U U900 champion. Yinuo won 9U U400 2nd place. Daniel won Booster U600 1st Place and U9 Reservee 5th place. Allen won U9 Reserve 2nd place and Booster 4th place. Congratulations to all KLC players and thank you for every point you contributed to our team. 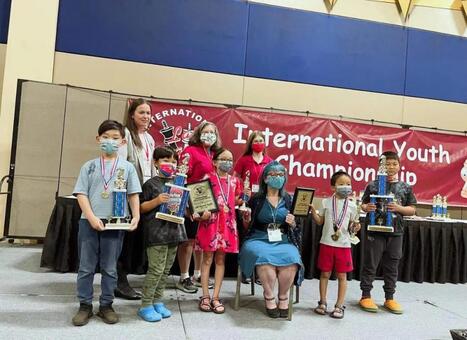 Congratulations to Chelsea Zhou qualified for US Team U14

​Congratulations to Patrick Liu qualified for US Team U8

9/15, Patrick Liu, 7 years old, achieved rating 1612, has qualified for US Team by rating to participate in the World Cadet Chess Championships 2020, as United States Official Representatives by FIDE, the World Chess Federation.

Congrats to Bryan Xie earned the National Master title at 9 years and 6 months.
His current rating is 2201, and ranked
top 1 in the US Age 9 and under group.
He will participate in 2019 World Cadets Chess Championship U10 Section in China along with several other KLC students. Wish all players achieve good results.
9岁华裔国家大师棋路成长历程 ​

The 43rd CalChess Scholastic Super State Championship was held in Santa Clara convention center on 4/7 and 4/8. It's the most important scholastic chess tournament in the state and one of the biggest chess tournament as well. 1150 players join the largest state event this year. 25 players represent KLC attended this tournament. Many of them are first time play in the tournament.

Top 5 schools and top 5 clubs in each section will have team prizes. Top four players' scores count for the team total. In 5 sections, we only have 2 players. Because our players' great performance, ​they still won the team prizes, 2 beats 4. K-12 JV and K-3 Rookie are 3rd place. K-8 JV, K-6 Rookie, K-3 Champion, Kindergarten are 5th place.
第43届Super State落幕 -- 我院棋手取得佳绩

Congrats to Bryan Xie, 7- year old, rating 1900, won Champion at 2017 American Open K3 Open section. He won a big trophy as tall as himself and an iPad. He started to learn chess with Coach Kiki since 5 years old. In November 2017, by achieved a rating over 1900, he has qualified ahead to the 10 - year old requirement as United States Official representative to participate to the World Cadets Championships.​ He won the14th place in 2017 World Cadets Championship  U8 Open section in Poços de Caldas, Brazil, among over 80 players from world wide.

Congratulations to Bryan Xie has qualified by rating to participate in the World Youth Chess Champions 2017.

King’s Land Chess is pleased to announce that Bryan Xie has qualified by rating to participate in the World Youth Chess Championships 2017, as United States Official Representatives by FIDE, the World Chess Federation.

Congratulations to Bryan Xie. He earned this honor by achieving a peak post tournament rating according to the USCF’s April Ratings Supplement. Bryan just turned to 7 years old and one month, his current rating is 1680, rank 5th at Top Age 7 and under and rank 3rd at Top Age 6 and under.